Johannesburg, affectionately called Jo’burg, Jozi, and E’Goli, the “city of gold,” is the financial and industrial metropolis of South Africa, built on a rich history of gold mining. The city is rapidly evolving from a crime-tainted safari stopover to a vibrant hub for arts and culture. Cutting-edge contemporary galleries and the new Maboneng Precinct, with its funky restaurants, cafes, and art studios, now rank among the city’s top tourist attractions along with the poignant Apartheid Museum and Constitution Hill. Glaring disparities still remain – the shanty towns of Soweto, birthplace of the nation’s struggle for democracy – still contrast sharply with the walled villas of wealthy enclaves and the city’s gleaming skyscrapers. However, rapid changes are coaxing tourists to linger. Travelers can hop aboard one of the new Gautrain trains and buses to explore or take a guided tour. Not far from the city’s borders more adventures await. Visitors can commune with wildlife at a popular lion park; stroll among the beautiful gardens and parks in Pretoria, the country’s administrative capital; and explore the UNESCO-listed Cradle of Humankind, one of the richest paleoanthropological sites in the world. 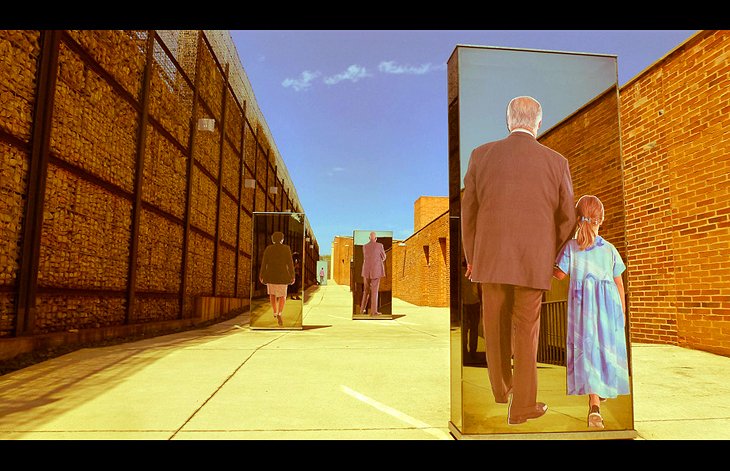 The Apartheid Museum graphically portrays the apartheid story through photos, artifacts, newspaper clippings, chilling personal accounts, and film footage. The sights and sounds of the apartheid era assail visitors as they move through the thought-provoking permanent exhibits on an emotional journey through South Africa’s history. Paths follow the country through decades of oppression to the birth of democracy. Reserve at least two hours and preferably longer to get the most out of a visit here. Those interested in learning more about South Africa’s struggle for freedom, should also visit Liliesleaf Farm Museum, the former center for the leaders of the liberation movement. 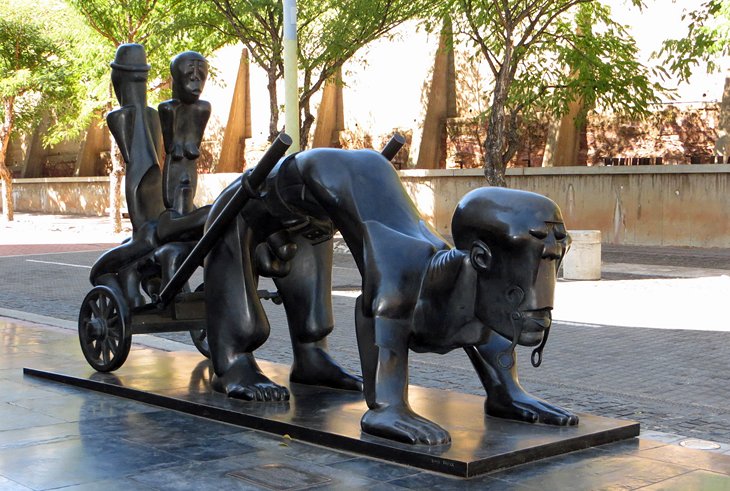 Overlooking the city of Johannesburg, Constitution Hill is a former prison that provides fascinating insight into South Africa’s history. At the site, visitors can explore provocative exhibits at the Number Four museum, the Women’s Gaol museum, and the Old Fort museum. Together, the precinct was once known as The Fort, and it forged a reputation for its brutal treatment of political prisoners, common criminals, and passive resistors; famous former prisoners include Nelson Mandela and Mahatma Gandhi. Today, the old Awaiting Trial building has been transformed into the Constitutional Court of South Africa, a symbol of freedom, which works to protect the rights of all the nation’s people. The court welcomes visitors who want to attend hearings and watch the judicial process. Guided tours of Constitutional Hill offer valuable insight into its rich history. 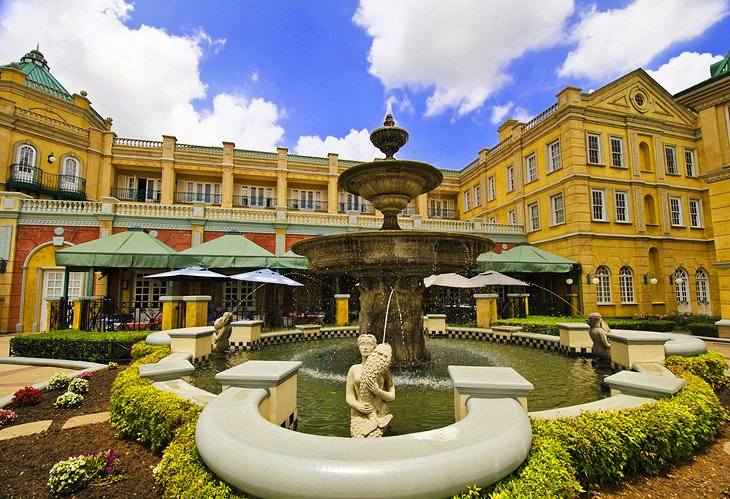 At Gold Reef City, eight kilometers from the city center, visitors are whisked back to the gold rush days through a series of thrilling theme park rides and historical exhibits. This family-friendly attraction hosts reproductions of buildings and businesses from the era, including houses, shops, the Royal Theatre, a hotel, a Chinese laundry, a tailor’s workshop, a chemist’s shop, a newspaper office, and Johannesburg’s first stock exchange. Visitors can also tour a disused shaft of the Crown Mines, one of the richest gold-mines in the world, which gives a vivid impression of the work of the gold miners. 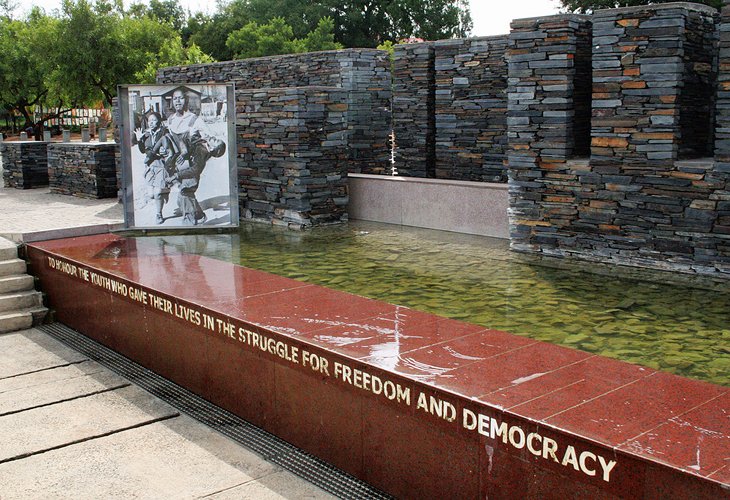 Soweto (an abbreviation for Southwestern Townships) lies 20 kilometers southwest of Johannesburg and offers visitors a journey into the soul of the fight for freedom. This was an area of planned segregation, where black laborers were housed far from the city center, many in shacks made of corrugated iron. It was also the birthplace of the struggle for democracy. In 1976, the Soweto Uprisings sought to overthrow the apartheid state and spread from here to the rest of the country. Today, visitors will see a land of contrasts. Mansions have sprouted up among the shanties, and the democratic government is trying to establish much-needed infrastructure and green spaces. Guided tours of the townships bring visitors here to meet the residents and see how they live. The tours often include a visit to Mandela House Museum, where Mandela lived with his wife Winnie before he was imprisoned for 27 years, as well as the Hector Pieterson Museum, and Freedom Square, where the Freedom Charter, the ANC’s guiding document, was adopted. 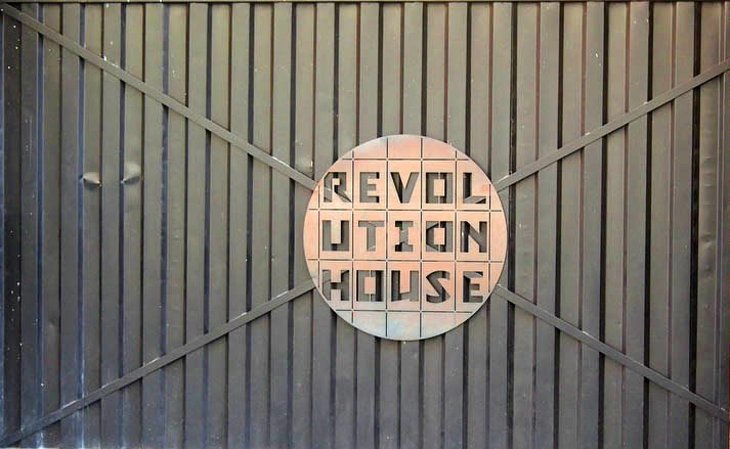 The vibrant Maboneng Precinct is a fantastic example of a successful mixed-use urban renewal project. Once a rather run-down neighborhood, Maboneng, meaning “place of light,” now fizzes with life. Funky restaurants, cafes, art galleries, shops, hotels, and entertainment venues mix smartly with residential buildings. A top attraction here is the weekly Market on Main with food from all over the continent. Arts on Main and Revolution House are two of the first developments where warehouses are transformed into artists’ studios, galleries, and shops. Other developments host Bioscope, an independent cinema; a community center; designer hotels; and boutiques. This is a wonderful area to wander around and feel the vibe of the city and grab a bite to eat or a cool drink.

Anyone interested in life during the Victorian era will love this “living museum” and Provincial Heritage Site. The current owner, Katherine Love, who has lived here since 1967, dresses in Victorian clothing, greets visitors, and leads them on a tour through the rooms of this beautifully preserved middle-class Victorian home designed by one of South Africa’s most famous architects, Herbert Baker. Along the way, guests can view impressive collections of 19th- and 20th-century furniture, art, and household items and learn fascinating stories about the former residents and how Victorian culture and customs have influenced Johannesburg today. A tour here takes about two hours and immerses guests into the ambiance of the era. After the tour, guests can top off the experience with a cup of tea on the veranda. 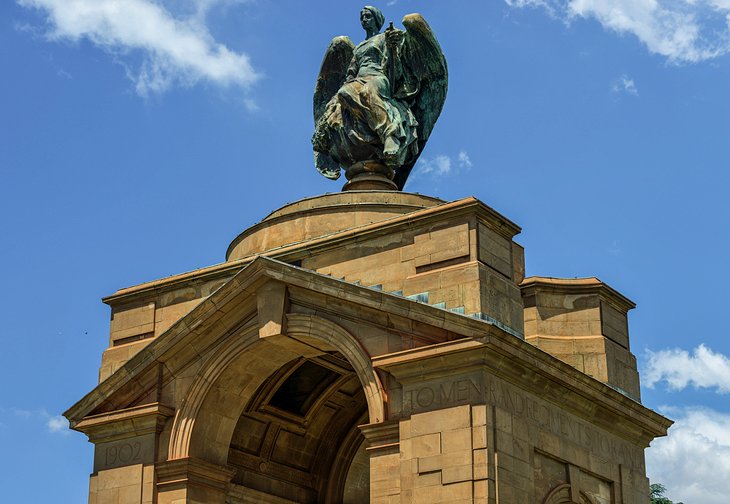 Exactly as its title states, the South African Museum of Military History traces the story of all the country’s military conflicts. Highlights here include the World War II fighter planes and bombers as well as exhibits of tanks, ammunition, arms, and medals. Particularly interesting is the exhibit on medicine at war, which details the Zulu’s use of traditional healing during the Anglo-Zulu war as well as modern day treatments used on the battle field. Another exhibit unveils life in the trenches during World War I. 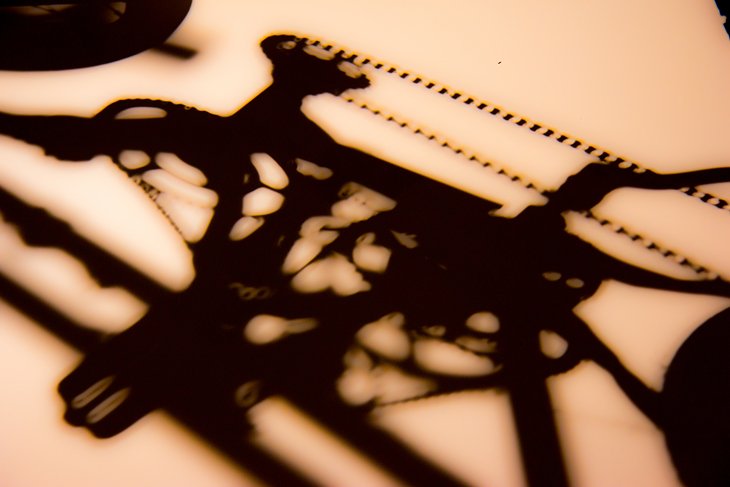 Opened in 2012, this impressive museum hosts a superb collection of African art with many works from South Africa as well as West and Central Africa. The museum is part of the Wits University Cultural Precinct in the trendy area of Braamfontein, which buzzes with students and university professors. Frequent temporary exhibitions infuse a freshness to the exhibits in this modern light-filled space. After admiring all the art, visitors can enjoy a meal or a snack at the popular cafe. 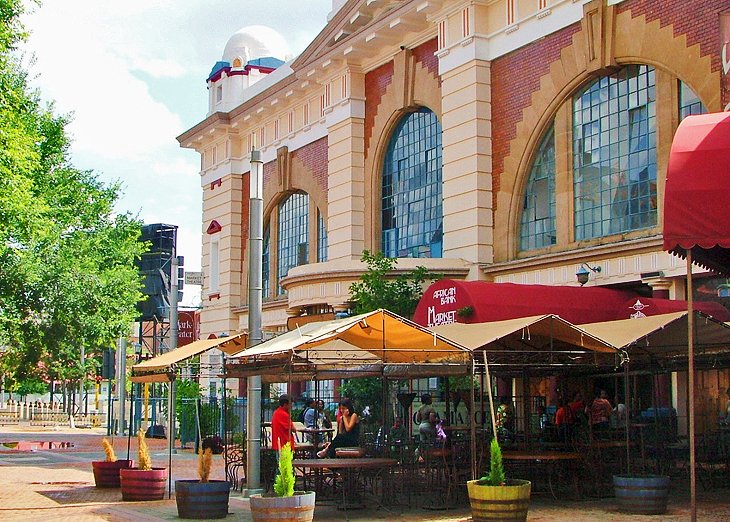 The Market Theatre complex housed in a converted market building, plays a major part in Johannesburg’s cultural life. It has four live theater venues where some of the finest productions in South Africa are presented. The complex also includes a bookshop, art and photographic gallery, and restaurants. Kippie’s is a popular jazz venue, with music by well-known musicians in the evenings. In the huge parking lot opposite the Market Theatre complex a large flea market is held every Saturday. Adjoining the Market Theatre, Museum Africa has as impressive ethnological department, with reproductions of the huts, tools, arts and crafts, dress, and toys of South African tribes.

In Joubert Park, the Johannesburg Art Gallery (JAG) is one of the biggest collections of art in Africa with more than 9,000 works, though only a small portion is displayed at one time. Unfortunately, the gallery has seen better days, but art aficionados will appreciate the breadth of the collection. The gallery focuses on works by South African and European artists. The exhibits include artifacts, drawings, textiles, and paintings from the 17th century to the present day from luminaries such as Picasso, Monet, Rodin, and Henry Moore, as well as South African artists such as William Kentridge. Works of sculpture are displayed in the courtyard of the gallery. Note that the gallery resides in a dangerous area of town, so it’s advisable to take a reputable taxi directly to the entrance. 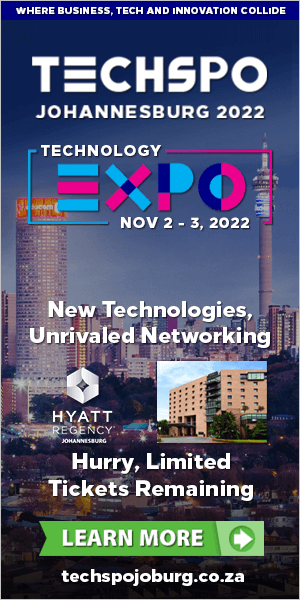